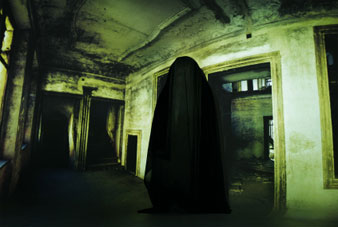 If you're from Louisiana, you've probably heard this tale before. There's a rumor that there used to be an enormous plantation house in the vicinity of New Orleans. It was owned by a mortician back in the early 1920's. When his wife died during childbirth, he turned the home into a boarding house, renting the rooms to people passing by. Distraught by the loss of his wife, he stopped working as a mortician and used his fortune to begin making improvements to the home.

For nearly six years he added many additional rooms, levels, and a series of twisting tunnels and cellars beneath the property. The strange thing is that many of the rooms appeared to remain unfinished. Doors would open up into brick walls, stairs would lead up to the ceiling, and long hallways would twist and turn only to abruptly end at a blank wall. In some rooms there were church like pews facing windowless walls, really strange stuff. Guests would sometimes literally get lost if they wandered much past the initial guest rooms near the homes entrance.

Locals refused to stay at the home. Many would actually drive three miles out of their way rather than pass by the place. There were rumors of guests seeing moving orbs of light in their rooms, hearing voices, their clothes and items being displaced while sleeping, and being pushed and prodded by unseen hands. A lady in the local newspaper told a story about waking up in the night to find bite marks on her calf and thigh. Supposedly there was photographic proof.

When normally domesticated, tame animals were brought into the home, they would suddenly act startled for no apparent reason and become vicious. There were seven cases of people ending their lives in the home within a short span of time, as well as numerous assaults. A particularly unpleasant incident involved newlyweds and a butchers knife.

After awhile the only people willing to stay at the boarding house were out of towners passing through. They didn't know any better and I'm sure that many of them ended up regretting their stay. The place also became the holy grail of destinations for ghost hunters as well as skeptics.

Now I don't know much about the occult, but my grandma had quite a collection of Ouija boards and she enjoyed using them. She would tell me all kinds of stories about contacting spirits and loved ones that had passed on. She never said anything negative about them at all. For her they were a source of happiness.

The one thing I do remember her telling me is that you always need to end a session after contacting a spirit. Never just stand up and walk away. The few times I used a Ouija board with her she always insisted that we move the pointer to “goodbye,” and thank the spirit for its time therefore releasing it.

Her theory was that if you didn't say goodbye, depending on what you'd contacted, it might remain with the board for a time. Or worse, some spirits may not be able to leave at all without first being released. From my limited reading on the subject a powerful spirit can do as it pleases, but there are limitations and rules that some spirits must follow. Besides, not saying goodbye is simply bad form.

Back to my story. The mortician eventually died, not long after he'd completed the additions to the home. The local community leaders immediately had the boarding house closed and demolished. This is where the story gets interesting.

As they were tearing down the home, they discovered Ouija boards hidden within some of the walls in the new additions he'd built. These weren't the typical William Fud boards that were sold at that time. They were all highly customized, inscribed with unknown symbols and made out of thick wood. In some areas of the home there were as many as four or more boards within the same wall. The really strange thing is that on all of them the “goodbye” had been chipped off. According to my grandma, if you want to trap a low level spirit or demon, the best way is to invite it to the board and then remove the goodbye.

A group of psychics supposedly visited the place after the boards were discovered. One theory is that the man stricken with grief, tried to contact his dead wife through an Ouija board. Believing he was successful he'd tried to bind her spirit to that place so they'd forever be together. He soon discovered that whatever he'd contacted was not his poor wife. He began to obsessively try over and over again, eventually driving himself mad.

The place ended up being turned into a cemetery in an attempt to put the souls there to rest, which I think is quite fitting.

Disclaimer: This site is for entertainment purposes only and is for adults only.